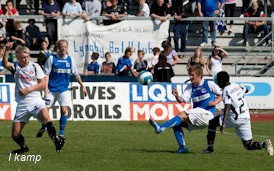 
Duration of the project

The club has been runner-up four times in the Danish Cup Final, and finishes second twice and third twice in the Superliga. The club’s best international result was in the 2002-03 season when the team reached the 2nd round of the UEFA cup. The club has a new stadium with a capacity of approximately 12000 spectators. It also has an official fan club.

The target groups of the club are all ages, as there are sport activities for both children and adults and a great involvement in the local community.

At the administration of FC Midtjylland there are 15-20 people. As the atmosphere of the club is very international with players from all over the world, all employees are very used to dealing with other cultures and they have both skills and expertise within this field.

FC Midtjylland is located in Central Jutland. It is a cooperation between the cities of Ikast and Herning. Herning has approx. 47.000 inhabitants, and Ikast has approx. 15.000 inhabitants. In both cities there are plenty of opportunitites for sparetime activities, and has many sports facilities (such as facilities for handball, football, badminton, tennis, and golf as well as a aquatic center and a fitness center.

The EVS volunteer will stay with a local Danish host family and will be expected to become part of the family and as such take part in the activities and responsibilities in the family.

One can read more about FC Midtjylland on their home page: www.fcm.dk
FC Midtjylland is one of the major professional soccer clubs in Denmark, and their premier team is in the Danish top league. The club organises soccer and handball training for all age groups and levels and has developed a network of over 100 clubs located in the western part of Jutland. The soccer club has generally build a reputation of finding and developing promising talents. It has a ‘soccer academy’ for young players with great potential. The academy attracts players from throughout Denmark, as well as players from a partnering club in Nigeria.

Volunteer tasks may include: – Assisting the coaches during soccer and handball training – Helping in connection with tournaments ( both home and away matches) – Helping office staff with various administrative tasks – Generally assisting staff in the daily work at a busy and successful soccer club As matches often take place in evening and weekends, volunteers should be prepared to work outside normal office hours. Naturally they will be given time off at other times.

The volunteer should be mature, have a keen interest in soccer, and preferably be good at playing soccer, and should be willing to assist wherever necessary in the daily work of the busy soccer club.

All documents written in english you can send to: asociacionbb@gmail.com with subject “SVE, FC Midtjylland, Dinamarca».