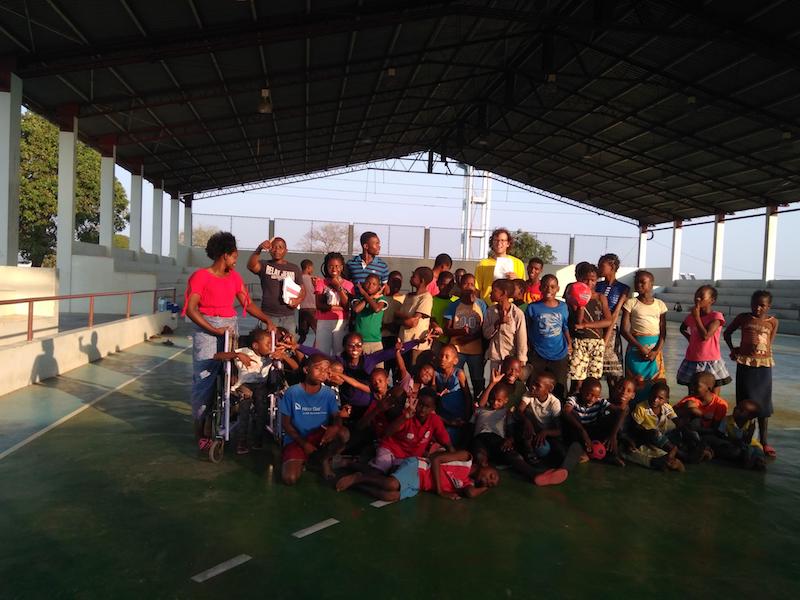 Hi Everyone,
My name is Francisco and I`ve been volunteering with YesEuropa for 5 weeks in Macia (Gaza province) in a project to support children. I am 30 years old and I went in August 2019.

I will tell you my story showing the good and the bad point of my experience.
Everything started when I arrived in Maputo and a volunteer was wating for me in the airport to drive me to his home. I was at his place for 2 days until we went to Macia (Gaza province) to start the project. These 2 days in Maputo were really nice. He lives in a neighbourhood without paviment roads, far away from the center. However, I loved that place.

Children playing everywhere, people selling food…, the hapiness and the closeness of people enthralled me. There was that kind of good enviroment and solidarity which sometimes, it is not present in our countries. Moreover, we went to the Maputo beach and to a birthday party where we were dancing and having dinner.
After these 3 days, we took the “chapa” towards Macia. (“Chapa” is the most common way of transport which consists in small vans and buses. Most of the times the vehicles are completely full of people). Once there, we went to our acommodation which was an student house. It was really humble, with the minimum facilities to live there. I loved the kitchen as it was a place where it is necesary to set a fire to cook (See picture 1). The food was really tasty as everything used to came from the land.

However, the time spent in cooking used to be quite high as there was to prepare everything. I had the opportunity to get fascinated with the mozambican food: (xima, feijão com arroz, kakana, mandioca, batata doçe, peixe carapau, frango, couve, coco…).
Apart from this, in the residence there were students. I used to chat with them and one afternoon, I was doing reinforcement classes in order to help a girl with her physics. After some months, I still keep the contact with her and she told me that she had passed the high school and she was preparing the tests to get acess to the university. Defenitely, I really liked the time spent in the student house.

In a daily basis, I used to wake up quite early to set up the fire and boil water, wash dishes, go to the green garden to buy lettuce, tomato and onion as well as the bread at the other side of the road. Once everything was ready, we used to have breakfast (“mata bicho”) and later on, go to the center to perform the activities. If the center was placed far away from the dorm, we used to go by “chapa”.

The kind of activities were quite varied:
• cleaning the windows, the walls and the futsal field of a Social Integration Center.
• planting trees and tidy up the scholar material in a kinder garden.
• playing with children.
After having performed the activities, if the center offered us the meal, we used to have lunch in the center, otherwise we used to come back to the student house in order to eat something.

Most of the afternoons and evenings, we used to stay in the student house as the activities lasted only half of the day, however, there were ocassions where we used to go back to work.
At night, we used to prepare dinner. If it was not my turn, I used to run in the middle of the night (spectacular the moon and the stars. Note that Moçambique is not well illuminated and it is possible to see the beauty of the sky), take a shower and after the dinner, play cards or watch a film all together.
There was no hot water and most of the times, the volunteers used to boild it and take the shower with a bucket. For me the water from the tap was not so cold and after my runnig, I was quite warm to take the shower.

GOOD POINTS of the whole experience

Before my travel, the organisation was resolving my questions and giving me the necessary documentation to apply for the VISA. This communications were efficient and they used to respond my e-mails quite quickly
A menber of the organisation was waiting for me at the airport for 2 hours. The reception was awesome.
I was on my own in Moçambique for 5 weeks and I never felt the loneliness of the traveller.
I had burocracy problems but I was completely supported by the organisation as well as by the volunteers.
I was the only foreign volunteer. All of them were from Moçambique.
I did not travel a lot around Moçambique as I did not have too much time. Therefore, I did not see too many wonderfull places. However, I dived deeply into the mozambican society which is much more valuable as seen fancy places. I met and spent a lot of time with local guys who showed me their opinion about the political situation, the problems with corruption, their religion beliefs, their worries, their dreams, their language (which is not portuguese. In Gaza province people speak “xangana”, however I used to talk with them in Portuguese), their suspenctitions, their fears, their traditions, their food, their weakness, their sexism, their way of living, the lack of oportunities, their weakness as well as their strenghs. To sum up, the long talks with them allowed me to discover Moçambique.
Bear in mind that having this kind of experiences is much easier when you travel as a volunteer.

BAD POINTS of the whole experience

Corruption
The planification of the activities by the hosting organisation was not well organized. There were a lot of days where there were no activities to do and volunteers had to spend all the day in the student house.
There was not a previous planification of the number of volunteers needed to perform the project.
There was not a good management of the money. Nobody calculated the money which was necessary per day in order to cover the expenses of food and transport of the volunteers.
Bad period to realize the project. In August, children have 2 weeks of holidays.
Bad communication betweeen the hosting organisation and the organizations where we used to help. Some days the organizations were not aware of our arrival.
Lack of governance and guidelines. There was not a clear leader to organize the team and instruct us in the daily activities.
The following burocarcy problem:
• My visa was issued just for 30 days and I was going to stay in the country for 36 days.

Therefore, I was informed by the mozambican embassy in my country that I should go to the migration center in Moçambique in order to ask for an extension. Once I was in Moçambique and my Visa was almost expiring, I went to the Migration services in the Gaza
province to ask for an extension. However, they retained my passport as the organization has not been informed to the migration services of Gaza about my arrival in Moçambique.
Sometimes, the mozambican laws are a little bit tricky and it is easy to get into trouble as the system is full of corruption.
Finally, I was asked to pay a fine of 15,000 meticais (224€) whose quantity was promised to be reimbursed by the hosting Organization as they did not inform about the location where I was going to be in Moçambique. After 6 months of my arrival, I have no notice of the reimbursement.
However, I would like to point that the hosting organisation showed professionalism and accountability with the problem and resolved the issue. When this kind of issues appear, it is necesary to be helped by the locals as they know the burocracy system more than we do.
I lost a lot of time of my holidays as for almost 1 week, I had to go to the migration services which are placed in Xai-Xai (The capital town of Gaza province)
IMPORTANT NOTE: in order to not been involved in such a burocracy problem like this, please, remind the organization that it is mandatory to inform to the migration services of the local province about your arrival in Moçambique.

My friends and family asked me if I would repeat the experience. My question is “YES, I would repeat it”. Moçambique is awesome and people from hosting organisation are nice people. In my project they showed organizational problems which they need to resolve for future projects. But what it is true, it is that they are contributing whith their grain of sand to help the mozambican society and they need more and more volunteers to perform the multiple projects in which they are involved. So if
you are thinking to volunteer in Moçambique, don`t doubt and go!

IMPORTANT STUFF TO BRING WITH YOU
-A front torch. In the kitchen there was no light and a lot of areas in the dorm were dark.
-Sleeping bag. In the dorm there was neither sheets nor blankets.
-Anti-mosquitos spray. Mosquitos in the morning and evenings are terrible
-Fortasec. It is a medicine to stop the diarreia. Your body desistabelysed when you travel. Different food, water…. and for this reason it was really useful in my travel
-Net. I brought a net, however, in the dorm the bed had one.
-An air pillow. It was one of the most useful things during my trip.
-Paracetamol. I took no pill, however I gave some pills to people as they had problems with period, headache and tooth aches.
-Fenisitil. It was really usefull for the mosquito bites.
-A nice book to entertain yourself.
-The vaccines. For my travel I had to take:
– Hepatits A(For example Havrix 1440)
– Typhoid feber
– Malaria (For example Malarone from GSK). It is not a vaccine.(It is quite common to have malaria in Moçambique)
– Cholera
– Meningococo group C (For example Menjugate)